Skidmark is a character in Turbo. He is a snail who races in Tito's snail racing, and is also a part of Whiplash's crew.

Skidmark is an absolute genius who has no sanity and is Whiplash's feisty second-in-command. For Skidmark, no stunt is successful if it doesn't end with an epic wipeout. He is gifted in mechanics, as he builds many of the mechanical shells that give his teammates speed. He is also a paranoid conspiracy theorist with a good sense of humor.

In the film, Skidmark was very skeptical about Turbo at first, but later warmed up to the kid. He is now seen to be good friends with him. He often tunes up and/or repairs Turbo's racing shell whenever it gets damaged.

Little to no interaction. Can be seen as acquaintances.

Burn is often annoyed by Skidmark, but in the episode "Skidzo-Brainia," (S1:E14), she states that he is "a strange one, but tolerable. Very tolerable."

"Oh, I wish I could rename myself."

"It's true! The Clamsquatch is a legitimate, fact-based rumor!"

"The capital of Delaware is Dover. It is not Wilmington like you'd think!"

"Oh, I wish I could rename myself." 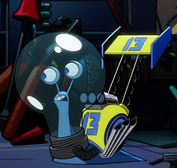 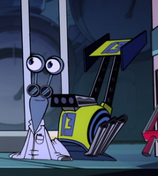 Add a photo to this gallery
Retrieved from "https://turbo.fandom.com/wiki/Skidmark?oldid=8105"
Community content is available under CC-BY-SA unless otherwise noted.