Chet is a respected member of the cautious snail community, the older brother of Turbo/Theo, and the official medic of the FAST crew. He's the team's voice of reason, but the odds are that he'll be ignored 99% of the time.

Turbo's brother, Chet, is his complete opposite, at least as far as taking risks is concerned. Chet is now part of the racing team but he never loses his worrying and cautious spirit. He is the team's business manager and voice of reason but odds are he will be ignored 99% of the time.

Chet is a plump blueish-purple snail with brown eyes and a brown shell. He later receives an ambulance shell.

The polar opposite of Turbo, Chet is the realist to Turbo's dreamer. Chet is shown to be grumpy, overly cautious, and always practical. However he is caring as shown in the movie, wanting to keep his brother safe. He is constantly embarrassed by his brother's obsession with speed, but over time comes to accept it and cheer him on. He doesn't like to be called a girl. He has many fears about the dangerous world around him, but is willing to take the risk to encourage Turbo at the race.

Burn has a crush on him which he at first seems disgusted or appalled by, but later, at the end of Turbo, he seems to be returning the affection. Throughout the TV series, Chet and Burn are dating.

Ever since he was young, Chet vowed to protect his young brother, Theo, by any means necessary to prevent him from being harmed. However, Chet has been struggling with his brother's obsession of being a fast race car, that constantly embarrasses Chet in front of the other snails when working at the Plant, but despite this, Chet continuous to defend and cover his brother in order for Theo and Chet himself from being expelled from the Plant. One day, Chet scolds his brother Theo after rescuing him from a near suicide attempt by Theo of trying to retrieve 'Big Red' while facing a lawn mower. Theo reasons that this was his chance to prove himself, but Chet is unconvinced and a demoralized Theo wanders off.

The next day, while Chet is discussing a meeting at the Plant he notices his brother acting strange as Theo strangely produce radio music coming out from his mouth. Embarrassed, Theo slips out of the meeting while Chet continues, but moments later, the meeting is violently interrupted when Theo crashes a tricycle towards them and causes damage. With the Plant messed up, Chet's boss rages towards Theo declaring he's finally fired, Chet pleads him to give him another chance as he tries to defend his brother's actions once again. But his boss was actually implying that both brothers are fired from the Plant. This results to Chet being heavily frustrated that gets him to rage and quarrel with his brother's actions, after years of defending and covering for him he gets fired as payment, Theo tries to explain but Chet's anger silences him until he is caught by a crow.

Seeing his brother about to be eaten by the crows, Theo uses his speed powers to rescue his brother. After that, Chet and Theo forgets their fight as they must find a way back home but are captured by Tito. When Chet witnesses his brother's shocking powers, they discussed about it. Instead of being impressed, Chet is horrified as to what has become of his brother, pointing out that he's a 'freak of nature' and suggests he gets him fixed but Theo, now Turbo, refuses and accepts what he is.

Chet is still worried for his brother about him, the Snails, and Tito's campaign of going to the Indianapolis 500. When Chet finds out that the CEO has granted his brother to compete in the race, he becomes more worried about Turbo. One night before the race, Chet expresses his worry about his brother competing in the race as he still does not believe Turbo can make his dream happen, implying it to be impossible, saying that he won't survive a single lap and tries to convince him to back down as he won't be able to save his only brother when he steps into the race. Turbo is shock to see his brother remain adamant even though he claims that his powers will keep him safe, he tells Chet that everyone, the Snails, Tito and company, the world, and even Guy Gagne believe in him and asks why his brother still can't. He leaves reminding Chet that his name is no longer Theo, but Turbo.

At the day of Turbo's big race, Chet decides to be left behind as he cannot bear to watch his brother compete as he still claims Turbo won't make it and instead he wishes Turbo to be careful, however, he is picked up by a little boy and enters Chet to the Indy 500 to watch Turbo race anyway. At the first stages of the race, Chet's claims might be becoming a reality as Turbo is relentlessly almost ran over, get hits from burned rubber, spins, and struggles to squeeze through cars, when Chet hears this he becomes increasingly worried and nervous about his brother. But later on, Turbo finally gets his head on the game as he is reminded that he needs to stop acting like a car and race like a snail, which allows him to pass through several racing cars, this gradually warms up Chet's feelings towards Turbo's dream as he finally tries to witness him racing. But after Gagne becomes desperate to be in the lead, he drives through the lane of burned rubber that causes his car to go out of control and results to a major pileup violently affecting multiple race drivers, including Turbo himself. Turbo awakens and finds his shell badly punctured, regardless he decides to finish the race as the finish line is just a few feet away, however he discovers the punctured shell has disabled his powers and he believes he is finished and disappointingly hides in his shell.

Chet decides to not stand by and watch his brother give up, he ventures out of his prison and heads for his brother and is assisted by Whiplash's crew via crows. When he arrives Chet shoutingly tells Turbo to finish this as he expresses his change that he finally believes Turbo that 'it' was in him and always been, Chet tells him the best thing about his young brother is that he never gives up and that he will not now in this race, and for the first time, Chet shouts his name 'Turbo' in full support.

Because of his brother's motivation Turbo finally decides to win the race using his normal speed as a snail and eventually he claimed victory. After the race, Chet is finally proud of his brother and his dreams of becoming a fast snail, but Chet is still cautious and overprotective of his brother. But the two finally got along.

Chet is introduced to the Tito's snail race, yet he is nervous.

"Those guys are crazy!" 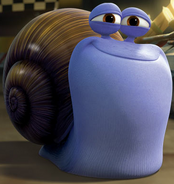 He is not the smartest.

Add a photo to this gallery
Retrieved from "https://turbo.fandom.com/wiki/Chet?oldid=8063"
Community content is available under CC-BY-SA unless otherwise noted.