Angelo is the brother of Tito. He works alongside him at the Dos Bros restaurant located at a run down strip mall. He displays dedication to his work as throughout the film he is seen primarily working, while Tito is off trying to do snail races, or something else.

When Tito brings up the idea about the snail he found being entered in the Indy 500 to improve their situation, Angelo immediately says Tito is crazy. Angelo begins describing past ideas of Tito's that he thought were crazy before such as the selling of sushi, having superhero outfits of Tacoman and El Churro, and having monkeys.

When Tito goes off to travel to the Indy 500 against Angelo's wishes, Angelo attempts to call him repeatedly, to the point that Tito's phone's voice mail message box was full by the time the race started.

After the race, Angelo celebrated alongside everyone else, and Tito surprised him with a new advanced talking cooking range.

you don't get it do you

Your snail in the Indy 500 is crazier than those ideas! 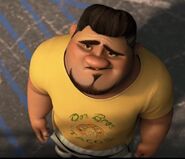 Looking up at Tito showing the sign he made to promote the racing snail. You really think you're gonna be famous with that snail don't you?

You see this?! Dos NOT uno!

You may have crazy ideas, but I still love you my brother. Come, it's time to eat. 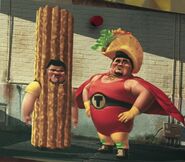 Angelo as the sidekick El Churro, and his brother as the superhero Tacoman. A past idea of Tito.
Add a photo to this gallery
Retrieved from "https://turbo.fandom.com/wiki/Angelo_Lopez?oldid=8861"
Community content is available under CC-BY-SA unless otherwise noted.